Usually, the first Sunday in September,the date of the literary festival in Eden Mills, is blessed with golden sunshine.
The horses and lambs amble out on the drive up, the wasps buzz around as you eat your lunch and listen to authors.
This year it drizzled so much I wanted to cancel but my daughter Jen wanted to come with 18 month old grandson William.

I now pictured trying to hush a toddler in a room where a soft spoken author whispered her reading. One of William’s strong points,however, is he’s like my Jackapoo Mortie, you stuff food in his mouth and he’s happy, busy and stops yapping. We sat in the children’s area awhile and heard Christine Tripp, an illustrator who I knew from the CANSCAIP listserve. Awfully nice to meet her in person and I liked the work she showed and the way she presented.

The rain continued to pour down and I felt cold and damp for a while.

We heard a bit of music, chatted with other authors, Jo Ellen Bogart, Janet Wilson, Linda Hendrie–then we meandered over to hear Robert Sawyer read. Wow, he read from a small hand held electronic gadget which almost made it seem as though he had his book memorized. He puts a lot of drama in his reading which we quite appreciated.

Then the sun smiled down again on the festival. I grabbed a cup of coffee and warmed up.

Back at the children’s tent, we got to hear Richard Scrimger, Art Slade and Ken Oppel–great presenters and all so different in what they read as well as how they read it.

I wanted to buy all their books but know I have to cut back. What did I end up with? Susan Jube’s new horse book. I think I’ll go read it now.

Figuring out the sights and smells of 1912 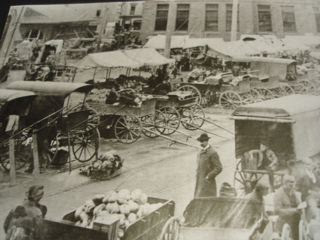 Before I can write the next scene of my flycatching book, I need to picture the Hamilton Farmers’ Market some 98 years ago.
What does it smell like? What are the sounds? What do they actually sell there. So I drove to Hamilton Public Library and visited the archives. The librarians produced many photos and a book with stories of farmers who went there over a long period of time.
Some things I just have to let my imagination fill in. For example a fire in 1917 caused them to rebuild the market. While the building burned, hundreds of rats made a break for it. So I’m guessing my character might spot a rat when he visited the mrket or my fly catching Jack Russel might. Of course chasing it would cause potatoes to be spilled, crates of chickens to crash, horses to bolt and my character to flee.

A day at the beach and the wedding couple returns

The beach felt a little rocky under my feet but the waves and water felt great. Mortie went for one swim more than Bob although after rolling in fish, he went for a forced dunk.

Monday, Craig and Eireann returned from Greece. We stood waiting at the airport just long enough for me to imagine worst case scenario honeymoons–happily all were wrong. They loved their two weeks away and wished it could

have been longer. They stopped back at our house for a welcome home feast complete with corn from the little bent over lady’s farm–we bought it on the way home from the beach. Adam and Jen joined us with baby William.