Seven reasons not to vanity google

While trying to find a good Internet address to send people to view my Last Chance for Paris trailer, I inexplicably became hooked into reading about myself, this entailed googling my own name in quotation marks: “Sylvia McNicoll”

The results weren’t pretty. First of all I discovered that on Boomer Counter they had a tribute already for me in case I died. On the good side, the content providers insisted I was still alive.
Then I saw that there was another Sylvia McNicoll in Edinburough Scotland who had a somewhat lascivious photo of herself up on some social network site.
I discovered that a young person was reading Last Chance for Paris but she added (HORRIBLE) immediately following the title. Why does she read a book she thinks is horrible? Conclusion:
it must be a novel study for school which could be good, I suppose.
I read the title of an article I’d written for Today’s Parent Toronto with no stars beside it as no one had rated it. Not true, by the way, as I’d rustled up 20 some close friends to give it a full five star rating.
My blog entry about Exercising Creativity had been counterfeited over to an exercise machine site. Yeah, yeah they violated my rights. But who really knows what I signed in order to have this free blog site? Does anyone read those pages of small print that we have to check off
before using a program? Should I hire a lawyer and blow all my royalties for the last few years?
There is a page out there that says I wrote The Snow Queen published by Tundra. Ken Setterington actually wrote it. This reminded me of how I was once hired by a school to do an author visit based on a book I also never wrote (There’s a Cow in the Swimming Pool) by Martyn Godfrey.
I found out a lot of other stuff like Grave Secrets is out in Braille.
Some teachers were discussing whether to use Walking a Thin Line as a novel study for grade six. It’s been out of print so long, I know there are no royalties in it for me.
Also that you could have Google translate the sites about yourself in other languages, Norwegian and Chinese in my case. Surprising how many countries seem to want to sell my books on some version of ebay.
The best reason not to Google yourself is that it took up a couple of hours of time that could have been spent reading a good book.
Oh and that tribute about me? All it says is: “Sylvia McNicoll is a Canadian children’s writer who lives in Burlington.” So I’m relying on all my good friends, a lot of whom are writers, to make sure that at least they get the tense right in my obit.

Filming the trailer of Last Chance for Paris

It’s always fun when the McNicolls + Filipowiczs get creative together. Here we all return to Lowville Park to film the trailer of Last Chance for Paris. While my husband Bob and I have travelled over eight times to Alberta to research the series, the cover photo for the novel was shot at Lowville by Bob due to time and budgetary issues. The model with , what a cooincidence, the same tatoo as my main character Zanna, daughter Robin posed wading into the stream. In the book she falls in the icy rapids and tumbles down the stream. Here we try to re-enact the cover moment. Craig McNicoll, videographer and video editor supreme for Emotion Pictures, donated his time and skills to the event.

Robin looks like she’s way too happy being buffeted by the currents in the shot. Afterwards the crew discusses whether the splash sounded loud enough or whether we should make Robin fall again and again. 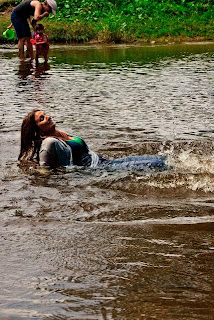 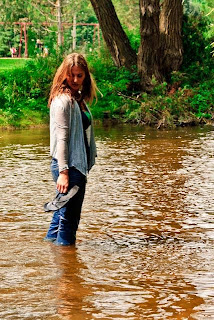 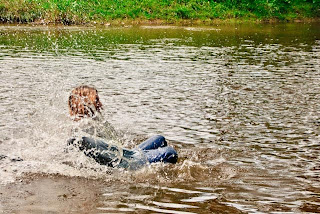 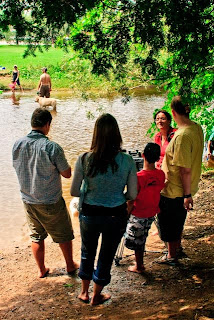