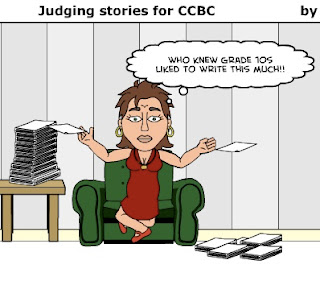 Eighty-two stories came by Purolator from the Canadian Children’s Book Centre.  That’s not an overwhelming amount, in other years I’ve received boxes, well over a couple hundred.  The difference, however, is that these are from grade 10 students.  These stories are not just a packet of writing exercises assigned by a Toronto private school teacher and turned in.
These are poems, essays, and stories about holocaust, suicide, werewolves, dragons, bullying, Canada geese, lobster fishing and more.  They come from students from Nova Scotia, B.C., the Northwest Territories, and all the provinces in between.  Some are from homeschooled writers, others from urban collegiate students.
What’s more all of them are good. Or let me correct that and say all have kernels of greatness in them, lyrical moments, an emotional turn of a phrase, a funny line, an profound insight, a window into a different kind of life or thinking.
When you receive that many entries, the temptation is to read until the first grammatical error or lapse in view point etc.  The first moment you’re taken out of the storie by a miswrite, you flip it down on to the pile.
Not this time.  These entries deserved better. So I’m only reading them ten at a time, right through.  Sticking on little yellow post it notes to remind myself about the topic.  The best ones of the days go to the top of the pile.  Sometimes all ten go to the top.

Then I’ll reread the top ones again.   While they all deserve applause and certainly this top pile, even more, I will have to be subjective in the end and just choose the story or poem that captures my heart the most. Almost there.

Everyone needs to embrace a ritual to get into right brain.  Mine is the morning walk.  I have a coach–see my middle photo where Mortie gives me a scornful eye for taking too long in gathering up my jacket, shoes, leash etc.  If I run back to answer a phone or worse, check email, the look becomes vociferous.  Not just barking, but shaped moans and groans. 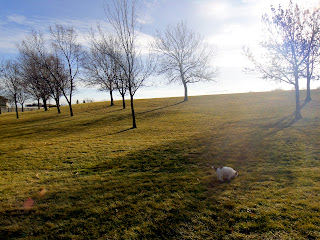 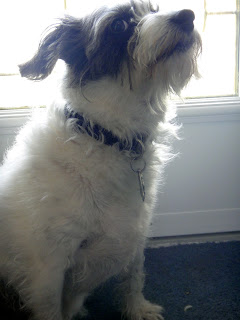 The final photo shows a random hole in the sky.  The monotony of walking helps you think but to be creative in any of the arts you need to be open to serendipitous input.  You want to observe details closer.  My digital camera is helping me with that. So my three secret writing tools: a morning walk, a talking dog and my digital camera. 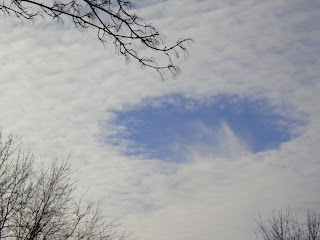 in time for Christmas, you can buy autographed copies of their work. February 11, 2012 we met to hammer out details of the November 10, 2012 PYI. Everything from how much food to order to whom we should invite to give the keynote address got decided in a very cordial way. Remember you heard it first here. Shh, shh! This is top secret but some of the confirmed speakers so far include: Paul Yee, Christopher Moore, Norma Charles, Carolyn Beck, Lena Coakley, Tim Wynne Jones, Clayton Hamner, Patricia Ocampo, Sheila Barry, Richard Scrimger, Vladyann Krykorka 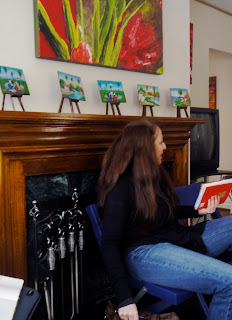 Rebecca Upjohn, and Helaine Becker. More to come yet. Some of the people in the photos, wonderful creators in their own right, are Patricia Storms, of course sitting under theart, Sharon Jennings, Lena Coakley, Gisela Sherman, Karen Krossing and Mahtab Narsihman. We’re looking forward to November. 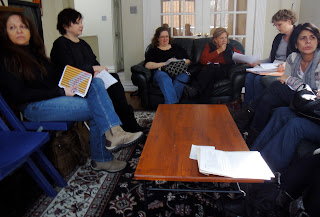 Not only is this the first signing of my latest novel due to actually be released in March, but it’s the first time in my 24 years of writing that I’m autographing ARCs or advanced reading copies.  Here’s a talented young writer Cheryl Rainfield (author of  Hunted) waiting for me to inscribe her ARC with some pithy wit.  “Best wishes”. 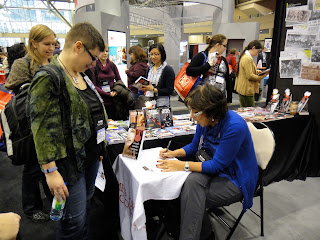 Authors often have difficulty concentrating enough to personalize a book and spell correctly.  Plus there’s a feeling that you should be able to look into someone’s soul and give them the exact three or four word message that will change their life and yet also endorse the overall mood and message of the story.
The lineup was decent and I enjoyed meeting many librarians from my past.  Arcs are of course complimentary so I’m not sure how they will work to boost my sales.  But it all felt very nice.
A couple of hours later, I emceed as 35 authors presented their new books in three minute infomercials.  The Annual CANSCAIP OLA Book launch, it’s a fun kind of “Gong Show”, who remembers that television game show? Authors dress up, sing, read from their books or reviews–it’s a very celebratory event and librarians crush each other to get to it.  Just kidding.  About the crushing, I mean.