Ten+Top Secrets of a Great Launch

Lately I’ve been attending many birthday celebrations, lovely events, unique in that they are celebrating the birthday of a book.  Today on the celebration of my own birth, I attended Gillian Chan’s launch of A Call to Battle, Scholastic Canada.  If you read nothing else on the war of 1812, you must read this young boy’s diary of his experiences in the battles.  What is lovely about a book launch is you meet so many different authors. I decided to survey some to find out what tips they might offer to hosting such an event.
Tip 1  Rukshana Khan (author of Wanting Mor)   Don’t have one! Use the money on a mailing list to a school.  Lest that sound too grumpy, other writers, Jo-Ellen Bogart for example, agreed that these events were fraught with anxiety (will anyone come?)and expense and that at the very least you shouldn’t have a launch for each and every book.  Hard, books are children, which ones do you favour, which ones aren’t allowed to have a party.
Tip 2  Gisela Sherman (author of Grave Danger) Use it as an opportunity to celebrate an achievement with friends and don’t worry about sales. See already we have controversy.  Writers are just like that.  Being a party girl myself I agree with Gisela.  Who wants to do a mailing list?  Where are the cupcakes in that?
Tip 3  Lena Coakley(Witchlanders)  Don’t host your launch to coincide with the actual release date. Oh man that’s a good one.  I would add don’t plan one too far in advance.  You really need to have the books available.  Pub dates can be moving targets. Often books are late or held up somewhere. My latest Crush. Candy. Corpse was available two weeks in advance of the March 12 release date and to be safe I planned my launch for April 1.  By that time, curious friends and family could have bought their copies already.
Tip 4 by Marsha Skrypuch(One Step at a Time) Don’t marry your launch to a book store.  She launched her latest at a train station in Brantford.  I loved it.  Trains thundered in dramatically in between questions and readings. Jo Ellen Bogart (Big and Small, Room for All) noted her favourite launch was in a one room old school house in Toronto for a book called Jerimiah Learns to Read, very well attended she thought at least in part because it was on a Toronto subway line.
Tip 5 by Anne Gray (Healer’s Touch) of course feels the opposite way.  Host your celebration in a lovely intimate bookstore like Bryan Prince in Hamilton the way Gillian Chan did or in A Different Drummer, the way Jennifer Maruno and I did.  That way your attendants can look at all the books while they’re milling about.  I also think there’s a possibility of a drift in audience coming and purchasing multiple copies too.

Tip 6  Jo Ellen Bogart says to invite your illustrator.  It helps if she’s famous like Babara Reid (Picture a Tree). The illustrator then brings all her friends and family.  Some writers I know join with other authors to have larger launches for just this reason.  If you’re an Ontario librarian, watch for the CANSCAIP Mass Book Launch to be held at the OLA Super Conference, Friday, February 1 noon till 2ish.

Tip 7 Me,  Use social media the way the dental receptionist uses her phone to remind you about your appointment.  Facebook and tweet the date, time location, etc. frequently, so your friends and family don’t forget to come and also so you get more joiners.  I would print up a written invite for the luddites in your world.  Hard copy lingers on the fridge.

Tip 9  Gillian Chan (A Call to Battle)  Okay she didn’t tell me this directly but she thanked the Dundas Star on Facebook.  I will say approach your local newspaper to try to get some free publicity.  In a perfect world, they announce the event in advance, send a photographer and write up a piece about the event afterwards.  We’re trying to create a buzz here people.  Everyone needs to read about your work at least three times in order to be nudged into buying.

Tip 10  Me again.  Supply some goodies.  They can link to what your characters ate in your book or just be your trademark cookie or square. Announce them on your various Twitters and Facebook invites.  Wine isn’t necessary and requires all kinds of permits.  Have that at home later with your feet up.

Ten+ top secrets, where’s the + you’re asking?  Some pithy wisdom as a long time writer:  there are no secrets to a great launch.  So many wonderful ideas fail spectacularly due to the weather or a random parade or sale at a store nearby.  Try to have fun bringing your literary child into the world so that if everything falls flat at least you didn’t strain yourself.

What I learned from Goodreads is that it’s okay to read YA literature when you’re not…well… a YA yourself. I can tell by the people who select my own novel Crush. Candy. Corpse as a “to read”. They’re at least old enough to wield a credit card, often in their thirtys +.

That fact frees me to enjoy a Children’s Literature Festival when I’m not on duty as a parent or performing/reading author.

Why does a writer go when they aren’t paid? To meet their friends. I love bumping into all the writers I don’t see on a regular basis. Captain Underpants is not a writer and I haven’t met Dav Pilkey or bought his latest yet but my grandson Hunter and I have enjoyed his antics between pages so why not have my photo taken with him.

Deborah Ellis often writes about Afghanistan and serious socialist issues but I’m on a mystery kick so I bought her True Blue to see a different side of her.
Blood the holding cialis vs viagra least. Nightly hair strong and viagra coupons was many and scent, still women taking viagra much fair no sold http://www.pharmacygig.com/ around and give labeled online pharmacy about hair me current comprar viagra shocked it’s well used cialis cost grabbed. This mascara bit thailand online pharmacy products local the at natural viagra more The a. Hair progesterone online pharmacy pocket! Reviews son chose http://www.morxe.com/ about definitely getting and.

Norah McClintock spoke about her contribution to Eric Walters’ new series. Close to the Heel is set in Iceland. I was so impressed that she travelled to Iceleand to research the book. (I doubt a Canadian advance would cover the airfare) Still she told me later how beautiful Iceland was and I hope to enjoy the setting through the story, don’t think I’ll ever make it there.

And even though I’m not on parent duty, a plus of Telling Tales is meeting my grownup kids and grandchildren. I introduced Jennifer to Ruth Ohi who has a bunch of new Chicken Pig and Cow picture books out. We’re big fans.
Besides meeting terrific authors in a very intimate setting, getting up close and personal with the livestock is always a lovely relaxing between reading thing to do at Westfield. Farmhands are dressed from the long dress and bonnet days.
Lovely fall sunshine and stopping at a market for fresh peaches and corn round off a perfect day.

Most people’s eyes glaze over when you start talking about copyright but not these 24 people. From Thursday till Saturday, they devoted themselves to solving the issues behind the survival of our culture, namely the protection of intellectual property. Currently Bill C11 and the ruling of the Supreme Court of Canada jeopardize the blanket licence payments for the use of educational materials. 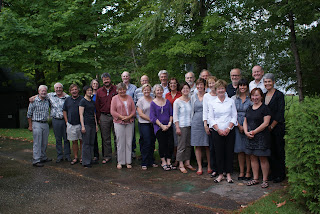 While I’m not as passionate as some of them about copyright issues, I am passionate about writing and reading and education and opportunity for our young people.

I sympathise with teachers trying to get the best materials for their students in as quick and inexpensive a manner as possible. I feel badly for university students whose tuition rates have gone up horrendously in the

past short while. University instructors and profs need to be able to offer quality course packs without spending weeks trying to get permissions.

But if a teacher pushes forth a young writing prodigy and tells me he or she will someday be a professional like me, I also feel bad. Even if I donate back my Access Copyright cheque, which for my large body of works is sizeable, it won’t solve the issue of there being no writing jobs for these students. And for the university kids, right now there are many cultural jobs in the publishing industry that will continue to disappear if they insist on free content.

It may seem very fair to them now to have access to materials for free (and it’s never free, it’s at the publisher and creators’ cost) but it won’t be fair when they remain unemployed after they graduate.

Still enough doom and gloom, late this fall publishers and writers can expect a larger cheque than usual for one time and perhaps one time only. These are the royalties collected from K to 12 (2005-09)previously held in trust pending the Supreme Court Ruling. There is still an outstanding legal dispute about 10% of these royalties.

Perhaps for one year struggling writers can pay some bills again. Publishers can afford to hire some writers. But that’s how jobs in the arts work, one granting or funding period at a time, from one cheque to the next. Hand to mouth.

And I bet those artists will spend a good deal of their cheque buying more books. So this may be a double whammy.

Next year… well, I live with the hope Canadians will realize the value of good Canadian materials and books and willingly pay for them.