Death on Track Take 2 Learning how to live

This is the second book in a series I’m working on where the main character dies in the first chapter, stupidly, and meets someone dead from her past at the gates of entry into the next life.  The character begs to return to life to address regrets and is granted the last week of her life to do over.  Can she avoid death? Maybe sometimes. 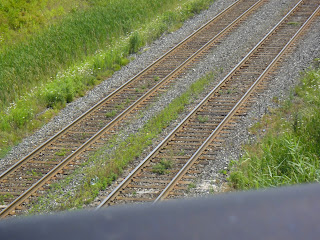 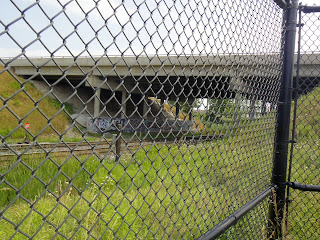 In Death on Track, Paige evades bullies by taking a shortcut along the rails during a snowstorm.  Working on the second draft (and by second, I really mean about the hundredth, only this one is as a result of feedback from writers) I wanted to find an actual location where this might have occurred.  Here it is in summer, along Dundas Street.  The mall nearby is unfortunately a strip of box stores.  The high school, unbuilt and unnamed as yet.
When visiting schools and conducting writing workshops, I’m often asked to address rewriting but usually in the sense of how hard we work at it and how many times.  It makes it all seem like such a burden.
Going through this second draft and painting on a second coat of detail was actually a delight.  I visited and interviewed an independent grocer, Mario of Marilu Foods on New Street.  I think I changed 10 words because of this interview but the story become so much more clear and real to me.   Most of the anxiety of writing is gone too as a result of the feedback.  My writing critiquers made me feel the actual plot of the story was a success.  The way it sounds in the creator’s head is not always the way the public reads it so this was a huge relief.
Now I’m waiting for a second round of reviewers to write a third draft.