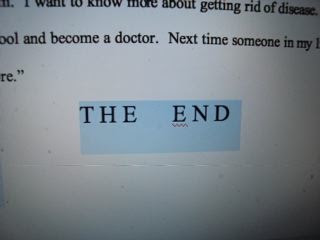 The Fly Catcher is a novel I began many years ago, wrote the first few chapters and an outline and sent it to a publisher.
Then I forgot about it. So did the publisher apparently. Cleaning out my office, I found the file on the project complete with the newspaper clippings on the contest photocopied. The file disappeared once. I re-researched the story pouring through the Burlington Library archives and then lost it again. I was getting superstitious about the project.

However, I did apply for Canada Council and received the grant. If they believed in me and the concept, than I certainly needed to grow my faith back. I had planned the story to be for grade 3, a shorter 30,000 word story. But a couple of weeks ago as I passed the wordcount, I began to think the story

would never end. Normally I write 1,000 words on a good day, a couple of scenes at most. But I was writing feverishly, two to three thousand words a day. And still no ending in sight. Finally at 11:30 Wednesday, last week I typed the end. However, we all know it’s just the begininning of a different kind of voyage. Rewriting.