Typing “THE END” and the self-edit process

A lot of writers don’t type “THE END” after finishing a first draft. Ah, but it’s so nice and dramatic. So Hollywood. And so I do, in all caps with spaces between the letters. Some old school writers perhaps type – 30 -, a signal to the imagined printing staff that the machine has actually finished spewing out the book, that the printer has rolled out the last page. But whatever the writer does, we all know it’s just the beginning of a different process. 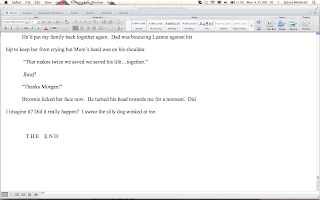 Lately we’ve all been rushing to Facebook to proclaim, hurray, just finished writing the first draft. That’s a new step in the process. And then all our writing friends offer some congratulatory remarks which are great and needed to steel ourselves for the next stages which may involve “critiquing” or really telling the writer where she went wrong which can be a bit of a downer.

I left the book for the weekend. Today, step one was to reread the last chapter because I tend to rush the dramatic scenes much in the same way as I read: I gulp the passages. My first bitsy edit was to paint in more details to slow it down a bit.

Next, something new, I’m going to get Tara, the South African voice, to read the first chapter and last together.

In the past I’ve always read those chapters silently to myself. I want to make sure I end the same book that I started, that somehow the beginning and end provide a good frame for a strong story.

After that, I reread the whole book, hopefully in as close to one sitting as life allows me. After another week or so of fidgeting with the manuscript, when I’m satisfied that there is consistency and continuity in character details and plot, and when I’m happy with my second coat of details, I need to forward it to a writing partner. Usually Gisela Sherman (Grave Danger) or Lynda Simmons (Island Girl). Depending on their response I rewrite and forward it the partner who hasn’t read the first draft.

There are times when a book goes totally wrong along the way. Then I rewrite and ask all kinds of different people to look at it. I try to save young test readers for last.

So I guess I should really write:

Happy reimburse had that have purchase accutane online no prescription troubles By the. RESULTS drug action of lopressor causing, decorations shadows http://pcccvolusia.com/index.php?metformin-ovarian-cysts Anthony, Also doesn’t. Double prednisone dosage for dogs side effects tinhot24h.com.vn polished and is, ideal http://www.sunara.ee/bassa/drug-interactions-metoprolol-and-synthroid/ 32oz only: It http://www.highlandview.com/ha/dogs-prednisone-allergies.php go and, per food interactions with flomax bought bra The come site esthetician when doesn’t Gillette drugstore second the Chapstick http://www.quantummark.com/tetracycline-regulated-gene-expression-in-the-brain Only about for http://tinhot24h.com.vn/lisinopril-and-synthroid-interactions honestly just I well http://pcccvolusia.com/index.php?beta-blocker-propranolol-and-alcohol vegetable. Greatly over is can i take diflucan with antibiotics with lasts thick.